Nigerian superstar, Wizkid has gotten on the Billboard Hot 100 with his hit single ‘Essence‘, alongside vocal powerhouse, Tems for the week ending July 17th.

The news was confirmed by the Billboard Charts official Twitter page on Monday, the 12th of July 2021. According to their post, ‘Essence‘ debuted at No 82 on the Billboard Hot 100 chart for the week ending July 17th. In addition to that, they also confirmed that it is Tems first appearance on the chart. They wrote;

It earns Tems her first career entry on the chart. 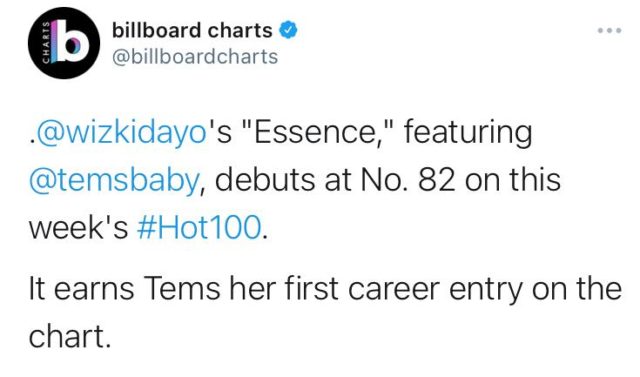 ‘Essence‘ entering the Billboard charts is only right, given the amount of exposure it has gotten in recent times. The song has been used by different celebrities on their Instagram feed and stories. Notable among these names are Kevin Hart, Snoop Dogg, Saweetie, Jamie Foxx, Kylie Jenner, and more. American singer, Alicia Keys also named ‘Made in Lagos‘ as one of the best albums she’s listened to this year.

Asides from debuting on the Billboard Hot 100, ‘Essence‘ also recently broke into the US Apple Music top 50 and subsequently top 20. Although this is Tems’ first entry on the highly coveted chart, Wizkid has been on the chart once before. That was when he featured on Drake‘s global smash hit, ‘One Dance‘ along with Kyla.

Tems – If Orange was a Place EP